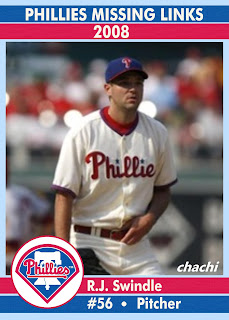 In May 2007, having been released by the Yankees organization a few months before, R.J. Swindle was pitching effectively for the independent Newark Bears of the Atlantic League when the Phillies signed him to a minor league contract.  The lefty climbed from the Low-A Lakewood BlueClaws to the High-A Clearwater Phillies, compiling a decent 2.25 ERA over 44 innings of work.

Finding even more success over the first part of the 2008 season with Double-A Reading and then Triple-A Lehigh Valley, he got the call to the big leagues on July 1st when the struggling Brett Myers was sent down.  He didn't appear in any games before being returning to the IronPigs a few days later, but he got the call again on July 6th when Tom Gordon landed on the disabled list.  He made three appearances, allowing 4 runs over 4 2/3 innings and on July 13th he was once again sent to Lehigh Valley.

Swindle's Phillies career came to a close when his 40-man roster spot was needed on September 5th due to the team bringing back Tadahito Iguchi to strengthen their bench.  His final games in the Majors came the following season when he appeared in 6 games for the Brewers.

Phillies Career
3 games, 0-0, 7.71 ERA, 9 hits, 4 runs, 2 home runs, 4 strikeouts in 4 2/3 innings
Acquired:  May 29, 2007 - Signed as a free agent formerly with the Newark Bears (Independent).
Debut:  July 7, 2008 - Relieved Clay Condrey in the 6th inning of a game against the Mets, surrendering a home run to the first batter he faced - David Wright.
Final Game:  July 12, 2008 - Relieved Adam Eaton in an eventual 10-4 loss to the Diamondbacks, pitching 1 2/3 innings and allowing 2 runs on 4 hits.  Collected an RBI off Randy Johnson when he batted for himself and grounded out to second allowing Eric Bruntlett to score.
Departed:  November 3, 2008 - Granted free agency and signed with the Milwaukee Brewers' organization, November 25, 2008.