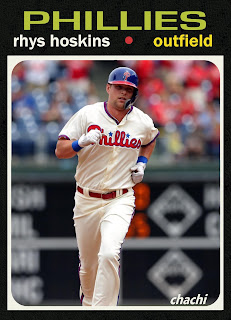 Topps released the first images of its 2019 flagship set this past Tuesday, and with that announcement it's time for me to introduce the first preview card from the upcoming 2019 release.  As evident from the card at the top of this post, I ultimately decided to go with the 1971 Topps design for next year's set.

The idea of using the 1971 Topps design for a Chachi set has been kicking around in my brain since at least 2009, when it was one of four choices I presented in a poll to help me decide the design for the 2010 Chachi set.  I again toyed with the idea of using the set for the 2013 Chachi release, and then a few years later it was my top choice for the 2016 Chachi release.  Every other set presented in my 2010, 2013 and 2016 polls has since been used as a Chachi set design with the exception of the 1971 Topps set.  So that set's time has come.

It's a fairly easy design to replicate, and I can see myself using red or blue borders (instead of black) for some limited edition insert sets next season.

Aw, maaaaaaaaaan! How did I miss the "Reader Input" post?!?

I guess it's not a huge issue, because I would've gone with the 1971 design anyway... but I can't resist the opportunity to offer input on 2020 and beyond.

I like the idea of using the 1991 for your Chachi-versary. A lesson I learned when I did 1991 customs two years ago: Prior to that I would "fill" in colors in between black lines in the design, but that works poorly for 1991 because the lines are so close together. What I did instead was create one layer with the black lines and a layer below that with the colors. I would change the colors by doing a fill on the colors behind the black lines.

A year or two ago I experimented with creating a 1972 custom for a made-up team ("GORILLAS"). I had arched text in the Broadway font and then manually putting in the lines all going to a vanishing point behind the photo. The results were OK, but not great... and it was pretty time-intensive.

Yep, 1991 is the clear front runner for next year and the Chachi Design team is already hard at work on a 2020 prototype. I'll gladly take your tips for replicating the black lines!