One Sentence Summary:  Against a Mets starting pitcher, Jason Vargas, with an ERA over 8, the Phillies failed to hit and ultimately lost this game in Williamsport, 8-2.

What It Means:  The Phillies and Mets participated in the 2nd annual Little League Classic, playing in front of about 3,000 youth baseball players and their families.  Both teams wore youth baseball-appropriate jerseys with the players' nicknames on the backs.  Todd Zolecki Tweeted this was the first time the Phillies had played a regular season game at a neutral site since September 3, 1957 when they played the Dodgers at Roosevelt Stadium in Jersey City, NJ.

What Happened:  Nick Pivetta got knocked around in his 3 2/3 innings of work, allowing six runs on eight hits.  The only Phillies runs came on a two-run home run from Carlos Santana (18) in the 6th.

Featured Cards:  Rhashan, the official Director of Smiles for the Williamsport Crosscutters, made the sign below to welcome back one-time members of the short season Class A team.  Crosscutters baseball cards for 9 of the former players/coaches mentioned in the sign are featured above.

Transaction:  Due to the "inconvenience of travel," Andrew Knapp was added to the active roster as the 26th man for this game. 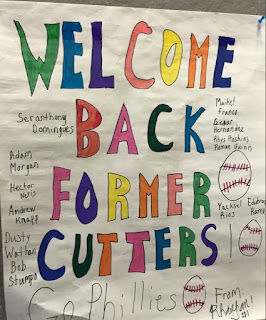 That Rashan video is great--thanks for linking! I saw that sign during the game but I didn't know the story behind it. That game was fun to watch, as well as the afternoon LLWS games where the Phils and Mets were in the stands. Come to think of it, all the LLWS games are a blast!

If you ever order a team set from the Williamsport Crosscutters, you'll receive a card indicating that the order was packaged by Rhashan. I keep Rashan's "card" with the team set each year in my Phillies binders.