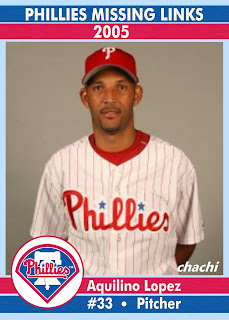 Right-handed reliever Aquilino Lopez has the dubious distinction of owning my least favorite custom Chachi card of all time.  I absolutely scoured the internet in 2005 looking for a picture of Lopez from one of his 10 games with the Phillies, posting on message boards, e-mailing people and trying every combination of "Aquilino Pitcher Phillies Lopez" in countless searches.  The card you'll see below represents the nadir of Chachi cards, in my opinion, and I couldn't believe it when I found the photo above used for Lopez's Missing Links card so easily last summer.

Lopez was claimed off waivers from the Rockies on August 2nd and recalled from the Scranton/Wilkes-Barre Red Barons on August 20th, taking the roster spot of Geoff Geary.  He pitched relatively well in late August/September, only allowing runs in 2 of his 10 appearances.  Lopez joined the Phillies in Clearwater in 2006, but with his roster spot needed he was dealt to the Padres on March 28th for a pair of prospects.  Lopez popped back up with the Tigers a few years later, appearing in 58 games over the 2007 and 2008 seasons.

One last Lopez frustration . . . Baseball Reference lists his Phillies uniform number as #33 while the 2006 Phillies Media Guide has him with #40.

0 Lopez Baseball Cards in My Collection