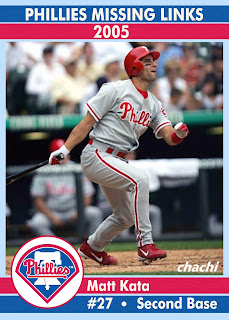 Reliever Tim Worrell missed nearly two months during the 2005 season with "personal psychological issues," and upon his return his set-up role had been assumed by the recently acquired Ugueth Urbina.  The Phillies dealt Worrell to the Diamondbacks on July 21st so that the veteran could be closer to his home in Scottsdale.  The return from the trade was utility infielder Matt Kata.

Kata played in five games for the Phillies, collecting his lone Phillies hit in his very first at-bat, before being sent down to the Red Barons for the month of August.  A September call-up, Kata was used sparingly in the final month of the season, pinch-running, pinch-hitting or coming in for a few late-inning double switches in five more games.  He was a late cut from spring training in 2006, claimed off waivers by the Reds.

Kata tied his career high in games played in 2007, suiting up 78 times for the Rangers and Pirates.  He played in 40 games for the 2009 Astros and then spent three complete seasons (2010-2012) playing for Triple-A Round Rock before calling it a career.

0 Kata Baseball Card in My Collection