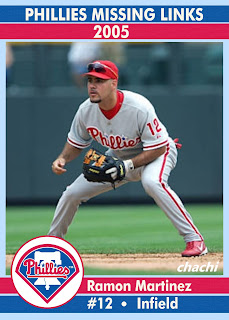 Not to be confused with the pitcher Ramon Martinez (Pedro's older brother), Ramon E. Martinez enjoyed a 12-year big league career primarily as a middle infielder.  He played in 33 games for the 2005 Phillies after Placido Polanco was shipped to the Tigers for reliever Ugueth Urbina and Martinez on June 8th.  Urbina ended up with a Phillies card in the 2005 Topps Update set, while Martinez had to settle for a custom-made Chachi card.

Martinez was used primarily as a pinch-hitter during his stint with the club, although he did get six starts at first base and a sole start at third.  His best game came on September 14th when he hit a third-inning grand slam off the Braves Horacio Ramirez in a game the Phillies would eventually win, 12-4.  Following the season, Martinez signed with the Dodgers and he'd play through the 2009 season before retiring at 36.

0 Martinez Baseball Card in My Collection