One Sentence Summary:  Backed by three-run home runs from Odubel Herrera and Andrew Knapp, along with a 4 for 5 performance from Scott Kingery, the Phillies demolished the Pirates in this series opener, 17-5.

What It Means:  The marathon game tied a record as the longest 9-inning game in National League history at 4 hours, 30 minutes.  When it was all done, the Phillies had a share of the top spot in the division with the Braves.

What Happened:  The offense punished Pirates pitching, banging out 18 hits.  Rhys Hoskins and Cesar Hernandez contributed three hits a piece to the parade and Carlos Santana had a 3-RBI night.

Featured Card:  This is the logoless "Diamond Kings" card for Herrera from this year's Donruss set.

Transaction:  Edubray Ramos was activated from the disabled list and Jake Thompson was optioned back down to the IronPigs.  Ramos picked up the win in this game in relief as starter Nick Pivetta went just 2 2/3 innings.

Field Report:  We spent more quality time on July 5th at the Grand Canyon and then on July 6th it was off to Hoover Dam (way too hot) and Las Vegas (too crowded for me).  It was my first time ever visiting Vegas and the only real reason I wanted to go was to see the Beatles-themed Cirque du Soleil show, LOVE.  And it was amazing!  I honestly could have seen it a second time right after the first viewing. 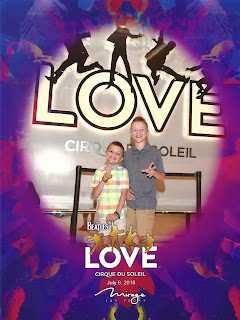