One Sentence Summary:  Jake Arrieta recorded his first win since May and the Phillies scored three runs with two outs in the 7th inning to win this contest, 3-2.

What It Means:  The Braves and Phillies continued to match wins, and the tie atop the division remains.

What Happened:  Arrieta went seven strong innings, striking out 8.  Seranthony Dominguez pitched a scoreless 8th and Victor Arano was handed the ball in the 9th, ultimately recording his second save.  The scoring in the 7th inning came courtesy of a Nick Williams triple, a Scott Kingery single and a Jorge Alfaro double.

Field Report:  On Saturday morning, we left the bright lights of Las Vegas and headed into the canyons of Utah.  As Arrieta was facing off against the Pirates, we were hiking down (and eventually up) the Navajo Loop Trail in Bryce Canyon.  The picture below was taken just as the Phillies-Pirates game was getting underway. 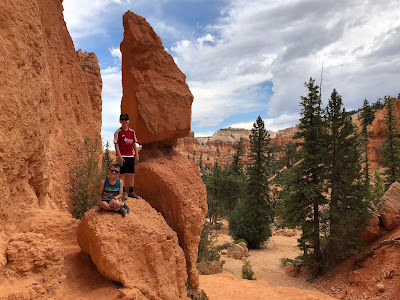 Email ThisBlogThis!Share to TwitterShare to FacebookShare to Pinterest
Labels: 2018, Arrieta