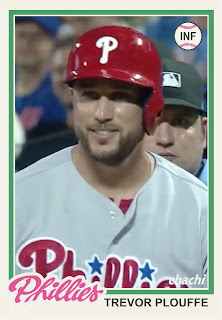 First Mention on The Phillies Room:  July 15, 2018 - There were a flurry of roster moves before this game.  De Los Santos and infielder Trevor Plouffe had their contracts purchased from Lehigh Valley.  Reliever Jake Thompson and outfielder Dylan Cozens were both optioned to Lehigh Valley while reliever Hoby Milner was designated for assignment.  To make additional room on the 40-man roster, Pedro Florimon was moved to the 60-day disabled list.
Complete Chachi Checklist
2018 Chachi #43

Plouffe did end up with a Topps Now card three days after you posted this. And he cleared waivers and is back in AAA so perhaps he will have a more mainstream Topps card (since only 275 of that one were printed).

Really hoping for a 3rd series of the team issued photo cards. They have plenty of new players to add to the set and maybe Plouffe sneaks into the checklist somehow.