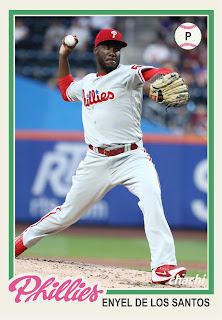 First Mention on The Phillies Room:  December 15, 2017 - Galvis Traded to Padres . . . Early Friday afternoon, the Phillies traded shortstop Freddy Galvis to the Padres for Double-A starting pitcher Enyel De Los Santos.  Having made his debut on April 5, 2012, Galvis had been the team's longest tenured player, and that title now falls to Cesar Hernandez.  Moving the 28-year-old Galvis to the Padres opens up the shortstop position for J.P. Crawford.

Galvis had become a veteran leader in the Phillies clubhouse over the past few seasons, and he obtained his goal of playing in all 162 games in 2017.  The team's regular shortstop beginning in 2015, Galvis was the club's opening day second baseman in 2012 due to an injury to Chase Utley.  In six seasons with the Phils, Galvis hit .245 over 642 games while providing solid infield defense.  I'll miss seeing Galvis out at short, but with his free agency approaching at the end of the 2018 season, it was time for him to move on and give Crawford a shot.

I have 47 different Galvis baseball cards in my collection, beginning with his 2007 card in the Williamsport Crosscutters team set and ending with his 2017 Topps Now Players Weekend card.  He'll most likely find his way to a few more Phillies cards within early 2018 Topps releases.

De Los Santos spent the 2017 season with the San Antonio Missions.  Todd Zolecki Tweeted that he was the No. 13 prospect in the Padres system and he'll land at the No. 9 spot in the Phillies system.  That seems like a pretty good return for Galvis.  De Los Santos appeared in the 2016 Topps Heritage Minors set.
Complete Chachi Checklist
2018 Chachi #42