One Sentence Summary:  Enyel De Los Santos made his big league debut, pitching 6 1/3 strong innings and Maikel Franco hit a 3-run home run in the 2nd as the Phils dropped the Mets, 7-3.

What It Means:  It's fitting that as our vacation ended, the Phillies found themselves atop the division by themselves.

What Happened:  De Los Santos struck out six, allowing three runs on five hits.  Franco had the big hit, but Nick Williams added a two-run single in the 3rd and Odubel Herrera hit a solo home run (16) in the 5th.

Featured Card:  The sole "Phillies" card in my collection for De Los Santos features him wearing the uniform of the San Antonio Missions in a photo from last season.

Transactions:  There were a flurry of roster moves before this game.  De Los Santos and infielder Trevor Plouffe had their contracts purchased from Lehigh Valley.  Reliever Jake Thompson and outfielder Dylan Cozens were both optioned to Lehigh Valley while reliever Hoby Milner was designated for assignment.  To make additional room on the 40-man roster, Pedro Florimon was moved to the 60-day disabled list. 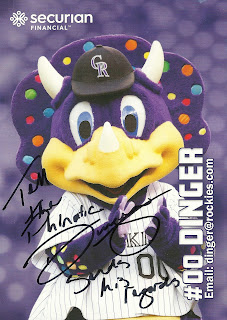 Field Report:  On the final day of our whirlwind trip, we toured Coors Field and enjoyed a hot and steamy Rockies game from behind first base.  Our behind the scenes tour included a trip down to the field and into the Rockies dugout.  Prior to the game (and it was HOT), we enjoyed batting practice from the outfield bleachers, with Doug catching a ball thrown to him from Diamondbacks reliever Archie Bradley.

Doug also snagged an autograph from Trevor Story prior to the game, but just missed adding an autograph from Charlie Blackmon.  (Although Blackmon tossed Doug a ball later in the game.)  In the 3rd inning, we made our way back to the outfield to visit with Dinger, the Rockies mascot.  Noticing my Phillies hat, Dinger inscribed my autographed card with "Tell the Phanatic Dinger sends his regards."  (Dinger - Consider the message sent!)

The Diamondbacks prevailed over the Rockies, 5-3, on home runs from Nick Ahmed, David Peralta and A.J. Pollock.

Our trip was fantastic, and we made so many great memories.  The only thing left to do now is plan the next road trip and cross a few more ballparks and National Parks off our list.  I'm thinking the summer of 2020 would be a good time to head out on the road again . . .
Posted by Jim at 8:00 PM

Fantastic trip. We'll be talking about this one for years . . . so many great memories.