One Sentence Summary:  The Phillies nearly pulled off a fantastic come-from-behind win, but a 9th inning rally fizzled and the Blue Jays emerged victorious.

What It Means:  The Braves also loss, so the Phillies remain just a half game behind them in the division.

What Happened:  With the bases loaded in the ninth, Rhys Hoskins struck out looking and Odubel Herrera grounded weekly to second to end the game.  Zach Eflin hit his first career home run, but he allowed three first inning runs and pulled from the game in the fifth.  Carlos Santana hit a two-run home run (9) in the sixth. 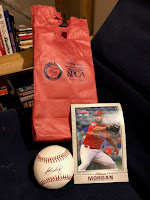 Field Report:  Doug and I watched this game from our "normal" seats in Section 315.  It was Bark in the Park night and we were amazed at the number of dogs walking around in the upper concourse.  What a fantastic event!  The Pennsylvania SPCA was on hand soliciting donations, and Doug and I both bought a mystery bag containing an autographed baseball.  Doug made out better than I did with his bag as he got a Santana autograph while my baseball was signed by Morgan.
Posted by Jim at 5:00 PM

Email ThisBlogThis!Share to TwitterShare to FacebookShare to Pinterest
Labels: 2018, Morgan A.