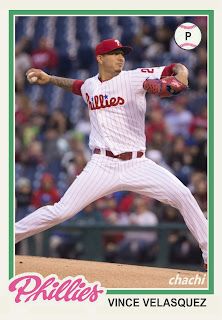 22 Velasquez Baseball Cards in My Collection per The Phillies Room Checklist
First Topps Flagship Base Card:  2015 Topps Update #US258

First Mention on The Phillies Room:  December 13, 2015 - Farewell Ken Giles; Closer Traded to Astros in 7-Player Deal - Of course I understand the rationale behind the Phillies trading their young closer Ken Giles to the Astros for five players.  There's no need for a top caliber closer on a team that will most likely finish buried in the second division again in 2016.  Even though he's young and inexpensive, it makes sense to trade Giles for potential building blocks for the future.

Still . . . this stinks.  I'm bummed.  My (now nine-year-old) son Doug is bummed.  My wife is bummed.  My youngest son Ben is mildly perturbed.  Giles is a genuinely likable guy, and someone I would have loved to have rooted for with the Phillies for years to come.  Instead, I'll root for him and his Astros unless they're facing off against the Phillies.  It's crazy to me that the four pitchers who threw the combined no-hitter for the Phils back in 2014 are now pitching elsewhere.

As is the case with any trade, much better analysis can be found on other websites and blogs.  What I'm most interested in are the baseball cards available for the five newest Phillies.

Vincent Velasquez (rhp) - Velasquez appeared in 19 games for the Astros in 2015, and the 23-year-old was considered to be one of the top prospects in the Astros farm system.  He began appearing in Bowman releases in 2010 and he has cards in the 2015 Topps Heritage and 2015 Topps Update sets.