Number of Cards:  46 + 8 cards added to an update set
Card Size:  4" x 6"
Description:  The second series of 2018 team-issued photo cards feature a design very reminiscent of the update set issued at the end of the 2017 season.  The cards have a gray border with the player's name and uniform number at the bottom and the Phillies script logo at the top.  The photos featured are from the first month and a half of the 2018 season.  Consistent with prior years' designs, the horizontal card backs feature biographical information and complete career statistics.

How Distributed:  Sets most likely went on sale at the beginning of the late May homestand with the Braves beginning on May 21st.  I purchased my set for $5 at a Scorecards stand on May 23rd.

On September 11th, an "update" set went on sale comprised of 8 new cards inserted into the packaging of the previously available 46 cards.

Complete Standard Checklist:  The cards are unnumbered, but I've presented them below ordered by uniform number.  The set comes in clear packaging with Rhys Hoskins and Aaron Nola facing up on either side, and with the cards largely in alphabetical order.

Every player/coach/mascot available in the first series release is repeated in this second series release with four additional cards added for relievers Rios and Dominguez along with bullpen catchers Stumpo and Driver.  This is the first time the Phillies have included their bullpen catcher(s) in their main photo card set since Clemente Alvarez received a card within the 2001 release.

Jesmuel Valentin's card switches his uniform number from the #76 he wore in spring training to the #9 he's wearing now.  Roman Quinn remains in the set even though he's spent the first part of the season with the Lehigh Valley IronPigs.  The only odd man odd here is reliever Zac Curtis who was on the active roster for 10 days in early May.

For the 8 players inserted into the set late in the season, this marks each of their first appearances in a team-issued photo card set and 5 of the players received their first ever Phillies baseball cards - Avilan, Bautista, Bour, Davis and Loup.  Cozens has a few Phillies baseball cards already to his name while Cabrera and Ramos have recently appeared on Topps Now cards.

For the second set in a row, the broadcast team has been omitted.  The Phanatic is pictured in front of the wall climb now featured in The Yard, a kid's area that opened at the start of the 2018 season at the former location of Bull's BBQ.

Rarities:  On June 10th, fellow collector Steve's son participated in a baseball clinic at Citizens Bank Park sponsored by Chevrolet.  Following the session, during which Rhys Hoskins made an appearance, the kids all received a pack of autographed coaches cards.  8 of the 12 coaches cards were identical to those found for sale within the first and second issuance of the photo card sets, but 4 of the cards were unique.  In the style of the second photo card set were cards of Mike Calitri, Manager of Advance Scouting, and former big leaguer Sam Fuld, the team's Major League Player Information Coordinator. 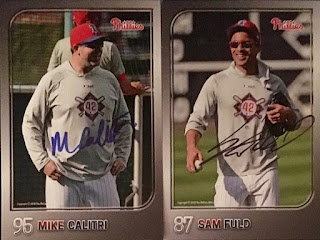