One Sentence Summary:  The Phillies banged out 10 hits in this 11-3 win over the Giants.

What It Means:  The Phillies and Braves continue to play their games in lockstep as both teams seem to either win or lose together.  The Phils remain a half game behind the Braves in the division and inexplicably they're atop the N.L. Wild Card standings.

What Happened:  Carlos Santana had a career high five RBIs with three hits while Maikel Franco contributed three hits of his own including a solo home run (7) in the fourth.  Nick Pivetta battled through five innings of shutout ball.

Featured Card:  Skipping ahead to include Thursday afternoon's game, Santana drove in 13 runs in the Giants series tying a franchise record for most RBI in a series of any length per this Phillies Tweet via the Elias Sports Bureau.  This is one of the four Phillies baseball cards (to date) available for Santana, from the team-issued photo card set. 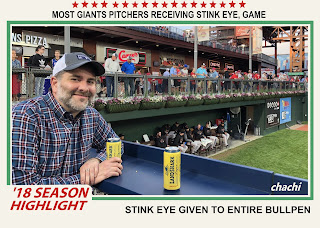 Field Report:  Jenna and I attended this game, and we managed to not actually sit in our seats the entire time.  After picking up our free Phillies hats (courtesy of Teva respiratory awareness night), we enjoyed loaded pork nachos from a railing behind third base and then we enjoyed a few adult beverages overlooking the Giants bullpen in Ashburn Alley.  I did my best to send bad vibes the way of their bullpen just in case any of them had any aspirations of shutting down the Phillies line-up.

We spent our final few innings on the newly installed bar stools located in the right field corner overlooking the entire field.
Posted by Jim at 11:00 AM