One Sentence Summary:  Aaron Nola shined in this 4-2 win over the Giants, striking out a career-high 12 batters.

What It Means:  I'm a little behind with these game summary posts given a busy work schedule and the fact that I attended two of these Giants games.

What Happened:  Nola allowed a run on five hits in his seven innings of work, on the way to his fifth win of the season.  Hector Neris recorded the final two outs for his seventh save.

Featured Card:  It has to be Nola, and now that he's finally arrived as an ace, Topps has curtailed the number of cards the company is issuing for him.  Here's his card from the Gypsy Queen set released in late March. 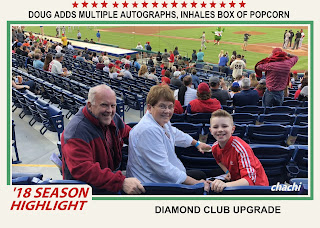 Field Report:  I invited my Mom and her fiancee Denny to this game and we upgraded to the Diamond Club to get a closer view of the action.  Before the game, a yet to be identified Phillies employee/coach (?) tossed Doug a baseball from the Phillies dugout.  Doug then had a very successful pre-game autograph seeking experience, adding autographs from Phillies manager Gabe Kapler, catcher Andrew Knapp, coach Dusty Wathan and four (!) autographs from outfielder Nick Williams.  Roaming TV field reporter Gregg Murphy was walking through the concourse during the game and Doug added his autograph for good measure.
Posted by Jim at 9:00 AM