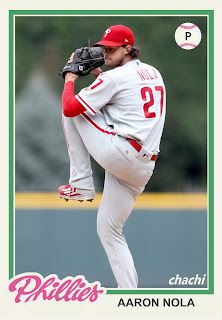 First Mention on The Phillies Room:  June 6, 2014 - Phillies Select Nola with First Pick - I haven't created any draft pick cards in the past, but for some reason I felt the need to make a card for the Phillies #1 draft pick this year, pitcher Aaron Nola. Nola was selected seventh overall last night and was a junior last season with LSU.  Overall, Nola went 30-6 with a 2.09 ERA in his college career, winning SEC player of the year honors in 2013 and 2014.  He becomes the first college pitcher drafted by the Phillies since they took Joe Savery in 2007.

What intrigues me about Nola is that scouts predict he could be the first starting pitcher selected in this year's draft to make the Majors.  Given the current state of free-fall the team is experiencing right now, it's nice to have something positive to think about.