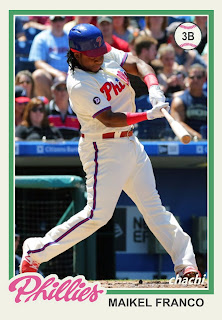 First Mention on The Phillies Room:  July 15, 2013 - The All-Star festivities are underway in New York, and yesterday afternoon Citi Field hosted the annual Futures Game.  The Phillies sent two representatives to this year's game, which features the top prospects from around the minors.  Third baseman Maikel Franco started for the World team (as their DH) and faced his Reading Fightin Phils teammate, pitcher Jesse Biddle, in the fourth inning.  Biddle won the match for Team USA, striking out Franco on three pitches.

I really had thought the Phils would retire #7 in honor or Mini-Mart....