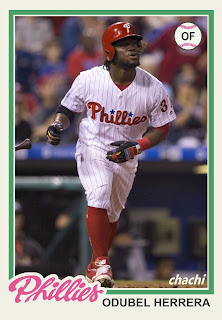 First Mention on The Phillies Room:  December 15, 2014 - Phillies Select Two in Rule 5 Draft . . .Odubel Herrera from the Texas Rangers and shortly after selected pitcher Andy Oliver from the Pirates.  Both need to remain on the active roster all season, or be offered back to their former teams.
The Phillies have always been active in the annual Rule 5 draft, and this year's draft was no exception.  They first claimed infielder/outfielder

Herrera is already being mentioned as the team's starting center fielder in 2015, hopefully providing a little more offensive punch than Ben Revere did in 2014.  Based on my limited research, Herrera doesn't have any mainstream baseball cards yet.

Oliver has actually seen time in the Majors with the Tigers in 2010 and 2011 and he was traded to the Pirates in late 2012.  With Triple-A Indianapolis last season, Oliver pitched 64 innings over 48 games with a 2.53 ERA.  He had several Topps baseball cards in 2010, including appearances in Bowman Chrome and Topps Update.