One Sentence Summary:  Nick Pivetta and two relievers blanked the Braves as Nick Williams and Aaron Altherr both hit key home runs in this 3-0 victory.

What It Means:  Per Todd Zolecki, this game marked the first time since September 2011 that two N.L. East teams at least eight games over .500 faced off against each other at Citizens Bank Park.

What Happened:  On the way to his fourth win, Pivetta struck out 7 and allowed just 4 hits in his 7 innings of work.  Seranthony Dominguez pitched a scoreless eighth and Hector Neris locked it down with his 9th save.

Williams hit a solo home run (3) in the fourth and Altherr provided some cushion with a 2-run home run (5) in the seventh.

Featured Card:  I wanted to feature Jorge Alfaro since he made three terrific throws from behind the plate to guarantee this win for the Phils.  He threw out Johan Camargo stealing at second in the seventh and threw out Dansby Swanson at first to end the inning on Swanson's slow roller in front of the plate.  Finally, Ender Inciarte attempted a bunt to reach in the ninth and Alfaro nailed him at first to end the game. 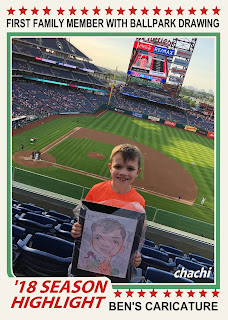 Field Report:  While Doug and I attended to Little League duties, Jenna and Ben enjoyed the weather and this game.  Ben became the first member of our family to sit for a caricature drawing at the ballpark, meriting a Season Highlight card.
Posted by Jim at 11:00 AM