I've never been a big fan of January.  There's the natural post-Christmas let-down, the frigid temperatures, the busyness of my work schedule and the complete and total lack of baseball.  It's dark when I leave the house in the morning and it's dark when I get home.  My attitude towards January is usually, "Let's get this over with," and I'm not entirely proud of that.

Last week, I walked in the door from a long day at work and a crappy commute home and found a small package on our kitchen counter with a familiar return address.  The fine folks from Section 36 had once again cleaned out baseball cards that had reached their 10-year expiration date, and the Phillies cards from this purge came to me.

As has been the case the last few years, I honestly already have most of these cards, but there are always a bunch of gems in the bunch and my sons now reap the bulk of the spoils.  But most importantly, it was such a welcome (and relaxing) exercise to open a package of baseball cards and thumb through each of the three stacks within.  Along with the Phillies cards from 2008, there was a cool selection of older and some more recent Phillies cards.  There were a number of cards from a variety of years for Jimmy Rollins, Cliff Lee, Ryan Howard and the Phillies all-time saves leader, the Closer Who Must Not Be Named.  Section 36 also added to my Adrian Cardenas super collection with another autographed card of the former Phillies prospect.  (I received my first two in a surprise mid-season package this past June.)

I had to count the years linked below, and I'm a little shocked that this exercise has now been happening for nine years.  That means I've been maintaining (and enjoying) this blog for the past nine years and Section 36 has joined me on the journey.  Time really does fly.

Thanks to Section 36 for the baseball cards and I'm excited for 2018 World Series between the Phils and Sox! 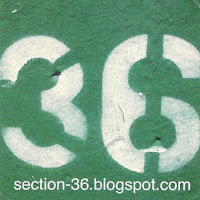