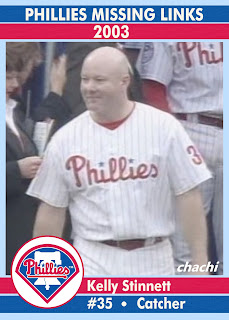 As we watched the closing ceremonies following the final game at Veterans Stadium on September 28, 2003, I thought it a nice touch that the current Phillies team opted to take part in the on-field introductions.  Kelly Stinnett entered the field after Rheal Cormier and the photo for this card is taken from that moment.  Stinnett was acquired from the Reds for Eric Valent right before the August 31st trade deadline as the Phils were looking for some catching depth behind Mike Lieberthal and Todd Pratt.  As it turned out, he was used mostly as a pinch-hitter in his seven games with the Phillies, seeing action as a catcher in a just a few innings in the September 9th game.

Stinnett enjoyed a 14-year career as a backup catcher with eight different teams, reaching a career high in games with 92 for the 1998 Diamondbacks.

Phillies Career
7 games - six as pinch-hitter, one at catcher, 3 for 7 (.429)
Acquired:  Acquired from the Cincinnati Reds for Eric Valent, August 31, 2003.
Debut:  September 1, 2003 - Pinch hit for Mike Williams in the sixth inning against the Red Sox, singling off Jeff Suppan.
Final Game:  September 28, 2003 - In the last game ever played at Veterans Stadium, pinch hit for Turk Wendell in the fifth and popped out to first against Greg Maddux.
Departed:  October 26, 2003 - Granted free agency.  Signed with the Kansas City Royals, December 19, 2003.