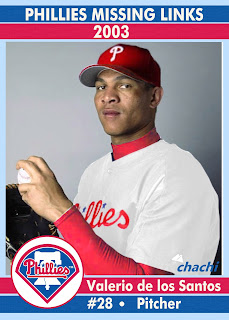 Even though the Phillies were 13 games behind the Braves in the division on September 2nd, they were still in the Wild Card hunt, just a game behind the Marlins.  To bolster the bullpen down the stretch, lefty Valerio de los Santos was purchased from the Brewers.  He appeared in six games for the Phillies in September, but half of those outings resulted in runs being scored by the opponent.  He finished his Phillies career with a 9.00 ERA, earned over just four innings pitched.  By my unofficial observation at the time, he was one of two current Phillies pitchers (along with Jose Mesa) who didn't take the field on September 28, 2003 for the post-game closing ceremony of Veterans Stadium.

de los Santos pitched in parts of nine seasons in the Majors, finding the most success with the Brewers between 2000 and 2003.

Phillies Career
6 games, all in relief - 1-0, 9.00, 4 strikeouts, 3 walks in 4 innings pitched
Acquired:  Purchased from the Milwaukee Brewers, September 2, 2003.
Debut:  September 4, 2003 - Relieved Jose Mesa after he had blown a save in the ninth inning against the Mets, pitching 2/3 of an inning.  Earned the win when Mike Lieberthal hit a walk-off single to left to score Marlon Byrd.
Final Game:  September 25, 2003 - Relieved Randy Wolf in the fifth inning, pitching an inning and allowing a run on two hits to the Marlins.
Departed:  December 21, 2003 - Granted free agency, signed as a free agent with the Toronto Blue Jays, December 27, 2003.

To me, Valerio will always be the guy who nailed Adam Greenberg in the head. To be honest, I had no idea that he ever suited up with the Phillies; you learn something new everyday!

I had completely forgotten about that until I started reviewing Valerio's career.