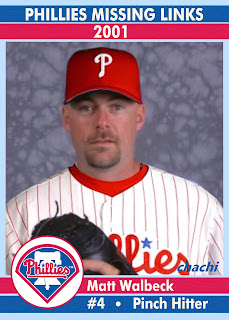 Mike Lieberthal's season-ending knee injury, suffered on a pick-off play on May 12th, set in a motion a catcher merry-go-round throughout the Phillies system during the 2001 season.  Johnny Estrada was recalled from the Red Barons and became the team's starting catcher with Gary Bennett serving as his back-up.  The Red Barons, in need of a strong catcher, purchased Matt Walbeck from the Reds on July 11th.  Walbeck was a September call-up when rosters expanded, but Estrada and Todd Pratt (acquired from the Mets on July 23rd for Bennett) got all of the playing time behind the plate.

Walbeck received one at-bat with the Phillies, pinch-hitting and singling for Vicente Padilla in the ninth inning in a game against the Marlins on September 30th.  A free agent following the season, he'd finish up his 11-year big league career playing two seasons with the Tigers.