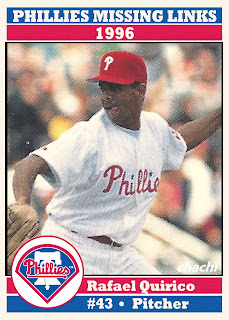 When starting pitcher Sid Fernandez was placed on the disabled list on June 24, 1996 with a left elbow injury and with a double header scheduled the following day, manager Jim Fregosi needed an emergency starting pitcher.  Rafael Quirico got the nod to start game one in Cincinnati, and it did not go well.  In the first inning, Quirico allowed four runs on three hits and a pair of walks.  He allowed three more runs in the second on a hit and three more walks before mercifully being pulled.  It was to be his first and last appearance in the majors.

Quirico spent nine seasons in the minors with the Yankees, Phillies and Angels organizations.