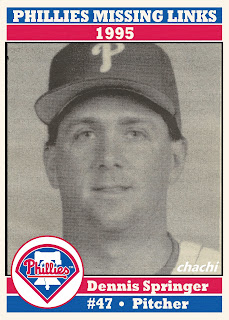 A September call-up along with Chuck Ricci, Springer's best start came against the Marlins on September 19th when he pitched seven innings allowing just a run on four hits.  He'd finish the season with an 0-3 record and a 4.84 ERA.  Springer bounced around a little after leaving the Phillies, pitching in a career high 38 games for the 1999 Florida Marlins and compiling a record of 6-16.  On October 7, 2001, while pitching for the Dodgers, Springer allowed Barry Bonds' record-setting 73rd home run of the season.