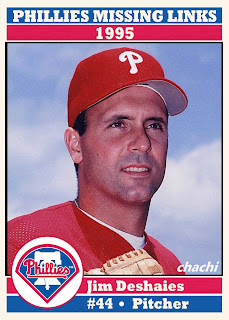 Jim Deshaies was at the end of his 12-year major league career when the Phillies came calling in need of starting pitching depth.  In the midst of the 1994-1995 player's strike, the Phillies signed Deshaies in late February 1995 and he started the season with the team's AAA affiliate in Scranton/Wilkes-Barre.  The Phillies needed a starting pitcher in late July when Curt Schilling went on the disabled list and Deshaies, who had started 19 games for the Red Barons, got the call.  It didn't go well.  Deshaies started two games, giving up six runs in each outing, and he was promptly released.

Deshaies' best years came with the Houston Astros, where he was a 15-game winner in 1989.