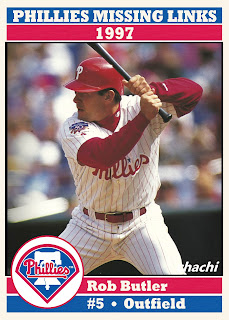 I find Rob Butler to be a surprising addition to this Missing Links list, as he appeared in 43 games with the Phillies during the awful 1997 season.  He hit a respectable .292 (26 for 89) while starting 25 games in each of the three outfield positions.  The Phillies had planned on veterans Danny Tartabull and Rex Hudler getting a lot of playing time in the outfield, but early season injuries to both resulted in Butler's promotion from Scranton/Wilkes-Barre.  Seemingly looking for a little more production from the outfield, the Phillies claimed Midre Cummings off waivers from the Pirates on July 8th and Butler's Phillies career was over.  He was sent back down to Triple-A and didn't return when rosters expanded in September.

Of particular interest to Phillies fans is that Butler had two at-bats against the team as a member of the Blue Jays in the 1993 World Series.  In Game 4, he pinch-hit for Todd Stottlemyre and grounded into a force out against Roger Mason.  In Game 5, he had one of five hits against Curt Schilling, with a pinch-hit single in the eighth.  He was stranded at second when Schilling worked out of his only real trouble of the night.