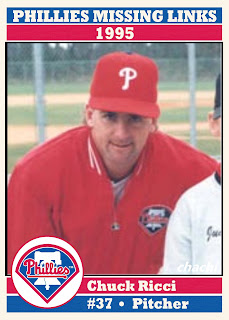 After a successful season with the Triple-A Scranton/Wilkes-Barre Red Barons (3.05 ERA over 68 games), Chuck Ricci was one of a slew of September call-ups by the Phillies in 1995.  Ricci is from the area, having attended Shawnee High School in Medford, NJ, so getting the call from the Phillies must have been a thrill.  He pitched well in his seven relief appearances, compiling a 1.80 ERA over 10 innings, but he'd never make it back to the majors again.

Originally drafted by the Orioles in 1987, Ricci was signed by the Phillies as a minor league free agent prior to the start of the 1994 season.  Following two seasons with the Phillies' organization, he spent the 1996 and 1997 seasons pitching in the minors for the Red Sox, Athletics and Expos.