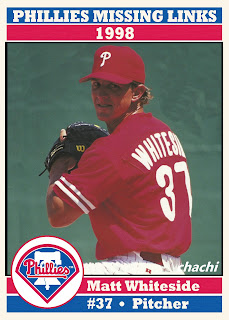 A successful relief pitcher with the Texas Rangers in the early 1990s, Matt Whiteside was released at the end of spring training in 1998 and signed on with the Phillies.  He made the club's opening day roster and was used sparingly throughout April and May, appearing in only 10 games.  He was hit hard in his final appearance on May 29th, allowing five runs (four earned) on six hits over three innings and was designated for assignment the following day.  Whiteside played out the remainder of the 1998 season with the Scranton/Wilkes-Barre Red Barons, appearing in 30 games and compiling a 6.48 ERA.

Following his short time with the Phillies organization, Whiteside pitched in parts of eight more seasons in professional baseball, including a stint in Japan in 2003.