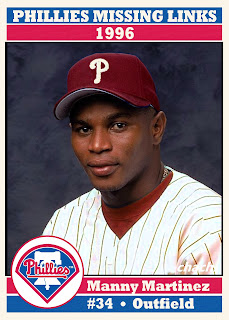 I mean no disrespect to Manny Martinez with this next observation, but if I can't remember one thing about your time with the Phillies, you're truly an obscure Phillies player.  I have zero recollection of Martinez playing with the Phillies for 13 games in July and August 1996.

Claimed off waivers from the Mariners on July 11th, Martinez was recalled from Scranton/Wilkes-Barre on July 22nd when the Phillies parted ways with J.R. Phillips.  Over the next four weeks, Martinez started 10 games for the Phillies, with nine starts in right field and one start in center field. He hit .222 (8 for 36) with a pair of triples with nary a home run or RBI in sight.  Sent back to Scranton on August 15th in favor of Wendell Magee, Jr., Martinez's Phillies career was over.

He'd re-appear in the National League a few years later, playing 73 games with the 1998 Pirates and serving as the Expos' regular center fielder in 1999.  Martinez played professional baseball through 2008, making stops in Korea, Mexico and the independent Atlantic League.