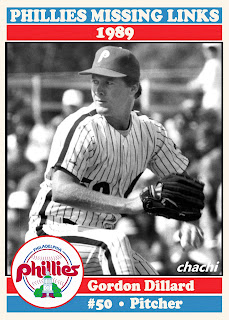 No offense to Gordon Dillard, but my fondest memory of his brief Phillies career is my Dad announcing in an exaggerated announcer's voice one May morning in 1989, "And my new favorite Phillie is that . . . Gordon Dillard."

Dillard came to the Phillies in December 1988 along with Ken Howell from the Orioles for outfielder Phil Bradley.  The deal was one of a flurry of small trades orchestrated by new Phillies GM Lee Thomas.  Dillard reported to Scranton/Wilkes-Barre following spring training in 1989, but was recalled in early May due to an injury to Jeff Parrett.  He appeared in five games for the Phillies, allowing three runs in four innings, and when Parrett returned from the disabled list he was sent back down to Scranton.

Left off the Phillies 40-man roster that offseason, he was selected by the Pirates in the Rule 5 draft, but he'd never make it back to the Majors.