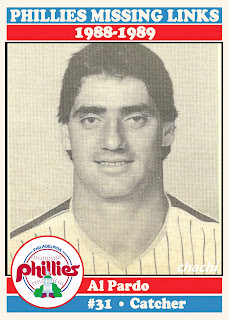 For two straight years in 1988 and 1989, when the Phillies needed to add an additional catcher to their bench in September, Al Pardo got the call.  Wearing #35 in 1988 and #31 in 1989, Pardo accumulated only three at-bats in his two stints with the Phillies, striking out twice and grounding out to second.  Prior to his brief Phillies career, Pardo was a back-up catcher for the Orioles, playing in 50 games in 1985 and 1986.

As of this writing, Pardo is one of only four players born in Spain to have reached the Majors.

Pardo also appears to have spent time playing in China and Japan.

I saw pictures of him from Topps on eBay a few months ago. I never knew he had pics of him in his Phillies uni.

I think I scanned the picture I used for this card from an old issue of The Phillies Report.