One Sentence Summary:  The offensive woes continued as Zack Greinke pitched the Diamondbacks to a 4-1 victory.

What It Means:  The Phillies are mired in a five game losing streak.

What Happened:  Odubel Herrera hit a first inning solo home run and then everything went quiet for the Phillies.  Their next hit didn't come until Andres Blanco led off the seventh with a single.

Featured Card:  For Father's Day, I let my sons pick the featured card for this post.  Since Herrera provided the only real excitement for the Phillies in this game, he got the nod from both of them.

Field Report:  We took advantage of the wonderful weather yesterday and purchased four tickets in Section 110 for this game.  We were assured the tickets would be in the shade, underneath an overhang . . . and we were for about an inning and a half.  The hot sun and another crappy Phillies game made us decide to walk around the ballpark more than we usually would, taking in the sights and sounds and food.

For those interested, I asked two different vendors (at both Newstand locations) if Tommy Joseph was now included within the team issued photo card sets.  Both vendors were kind enough to open the sets and look through each one, confirming that Joseph wasn't included yet.  The second vendor I spoke to informed us that a third team issued set was likely to be released following the All-Star break. 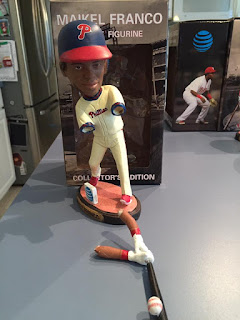 We can home with four Maikel Franco bobble heads, although one of the bobble heads immediately lost both arms when I tried to insert Franco's bat into his batting gloves.  Unfortunately, this is a very symbolic representation of the current state of the Phillies offense.

Be sure to check out the 2016 Season Summary page with game results and links to game summary posts.
Posted by Jim at 3:00 PM

Ha ha--poor Maikel! For what it is worth, I found out firsthand that if your kids' bobble breaks during the game and you go up to one of the handout centers inside the gates, they will replace it (especially if you have said child with you). Thanks for the update on the team-issue set.

To make matters worse . . . I realized last night that I had crazy glued his arms back on upside down. Oh well, at least we have 3 other non-upside down arm bobble heads in our house.