One Sentence Summary:  The free fall continued as every aspect of the Phillies game looked awful in a 10-2 loss to the Diamondbacks.

I put together the little chart below to show those responsible for this damage.

What Happened:  A pair of errors by Cesar Hernandez led to three unearned runs in this game. Adam Morgan departed in the fifth having allowed 10 hits and seven runs, although he did strike out eight.  Cameron Rupp's two run triple in the first was the sole bright spot of this game.

Featured Card:  Despite appearing in 31 games for the 1999 Phillies, I believe this is Robert Person's only Phillies baseball card from that season. 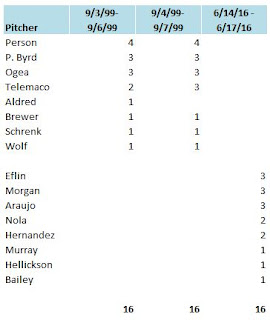 Transaction:  Desperately in need of fresh bullpen arms, Colton Murray was sent down to Lehigh Valley and Severino Gonzalez was recalled to take his place.  Gonzalez had started seven games for the Phillies last season, pitching to a 7.92 ERA.  He's had more success so far this season as a reliever.

Be sure to check out the 2016 Season Summary page with game results and links to game summary posts.
Posted by Jim at 12:00 PM

Email ThisBlogThis!Share to TwitterShare to FacebookShare to Pinterest
Labels: 1999, Person

I may be one of the few people to say "Hey, cool Robert Person autograph!"

Person broke into the Majors with the Mets, and one could argue that his biggest contribution to NY baseball was that the Mets got John Olerud in exchange for him.

Person's biggest contribution to the Phillies was that he inspired a fan group who named themselves "Person's People."