One Sentence Summary:  Tommy Joseph hit his first career home run and enjoyed a three-hit night in this 3-1 win over the Marlins.

What It Means:  The Phillies continue to win these low-scoring games with great pitching, solid defense and a few well-timed hits.

What Happened:  Joseph's home run in the second hit off the netting of the left field foul pole. Vince Velasquez lasted only five innings, but still managed to strike out 10 batters.  Overall, Phillies pitchers struck out 17 Marlins, one shy of the club record 18.  Hector Neris and Jeanmar Gomez did their thing again, with Gomez notching his 15th save of the season.

Featured Card:  I'll show off one of my cooler Joseph cards in honor of his big night.  This card is from the super premium 2013 Bowman Inception set, and I'm fairly certain I didn't pay more than a few dollars for this card.

Field Report:  It wasn't a great night for baseball, but Jenna and I still had fun.  We had dinner at Harry the K's for the first time in a few years and then leisurely walked around the ballpark, checking out the sights and sounds.  We eventually sat in the second to last row of Section 132, thanks to a kind usher who actually looked happy to have more people in her section.

I took the picture below before the game, showing a baseball card featuring Phillies helmet where Joseph's giant Topps card should have been.  Hopefully, the Phillies and Topps are working to get Joseph his own giant line-up card soon. 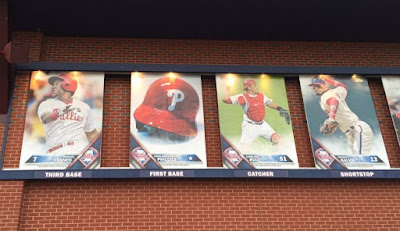 Recently added to The Phillies Room - 2016 Season Summary page with game results and links to game summary posts.
Posted by Jim at 3:00 PM