One Sentence Summary:  The Phils couldn't find a clutch hit in this 5-3 loss to the Marlins.

What It Means:  The offense stranded 10 runners and went 1 for 13 with runners in scoring position.

Featured Card:  I'm drawing a complete blank for this game summary post, and there wasn't really that much exciting about this game from a Phillies fan's perspective.  Prior to the game, Carlos Ruiz posed with new Marlins catching coach Brian Schneider.  Schneider was Chooch's back-up catcher for three seasons between 2010 and 2012.  This is one of his team issued cards that I hadn't previously featured on this blog. 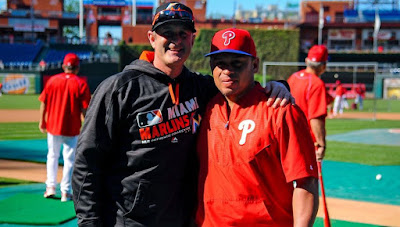 Recently added to The Phillies Room - 2016 Season Summary page with game results and links to game summary posts.
Posted by Jim at 12:00 PM