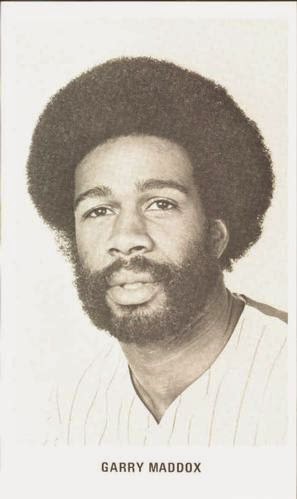 Number of Cards:  31
Card Size:  3 1/4" x 5 1/2"
Description:  As was the case with all Phillies photocards issued throughout the 1970s, these cards feature a black and white photo with the players' name below.  All photos feature hatless portraits of the players, coaches or manager.  The backs of the cards are blank and there's no indication on the cards themselves that they're from 1976.  Some of the cards contain blue facsimile autographs, as noted on the checklist below.

Variations/Rarities:  As Rick points out in his comments, there's a variation of the Johnstone card available.

Trivia:  I don't currently own any 1976 Phillies Photocards, and I had wanted to hold off on posting on any sets for which I have none of the cards.  However, in the interest of pressing onwards with this project, I've borrowed the images shown here from The Trading Card Database.

To date, the only years for which I haven't been able to track down any team issued cards are 1972, 1976 and 1981.  My guess is that the 1972 cards are rare (or rarer) due to the fact that the team absolutely stunk that year.  The 1981 cards could be harder to find because of the shortened season due to the player's strike.  But I would have thought that 1976 cards would have been more readily available as the team was gaining in popularity and was playing pretty well by the mid-1970s.
Resources:  The Trading Card Database; Beckett.com; Phillies collector Rick (@rickphils)
Posted by Jim at 7:00 AM

All of the 1976 team issues show the player without a hat on. However, there is one additional team issue--another Jay Johnstone card that shows him kneeling on his left knee with a bat similar to the poses that the McCarthy postcards used.

Thanks Rick. I've added the extra Johnstone card to the post.