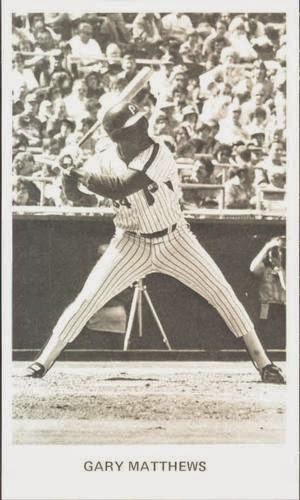 Number of Cards:  32
Card Size:  3 1/4" x 5 1/2"
Description:  As was the case with all Phillies photocards issued since 1970, these cards feature a black and white photo with the players' name below.  The backs of the cards are blank and there's no indication on the cards themselves that they're from 1981.  Some of the cards contain blue facsimile autographs as noted on the checklist below.  There are six cards available with a horizontal orientation as also noted below.

Variations/Rarities:  Rick confirms the existence of Tim McCarver's first ever broadcaster card, and Steve's checklist indicates the possibility of variations for Maddox and Proly.
Finally, while not part of the team issued set per se, there is a 1981 card of the Phillie Phanatic that was issued by Harrison/Ericsson.  I'm not including it as part of the main checklist above but it should be noted that a black and white Phanatic card does exist in the same size as the rest of the 1981 set.  (The same note pertains to the 1978 and 1980 team issued sets.)

I don't currently own any 1981 Phillies Photocards, and I had wanted to hold off on posting on any sets for which I have none of the cards.  However, in the interest of pressing onwards with this project, I've borrowed the images shown here from The Trading Card Database.
Resources:  The Trading Card Database; Phillies collectors Steve and Rick (@rickphils)
Posted by Jim at 7:00 AM

Last one of these on my list--I have written down that there are variations for Garry Maddox, and Mike Proly (but I don't know what type of variations they are; maybe Rick does?), plus I have on my list that Phillie Phanatic card by Harrison/Ericsson that you may of may not want to count as team-issued.

There is a Tim McCarver (he was a broadcaster that year) and shows him with a headset on. I am not aware of a Proly or Maddox variation. I am not sure of the origin of the Phanatic card. It may have been sold at the news stand which would make it issued by team but it is not the same design so I would not put it in the set.

Good point about the Phanatic card (which would also apply to the 1978 and 1980 cards). I have an "Other Phillies Postcards" binder for things like the Wall of Fame set, the Fan Appreciation Day sets (RIP after 2013), and oddballs like certain years' souvenir-stand-only sets and the Hunter Pence "Thanks Fans" card, so I will probably classify these Phanatic cards with that group.