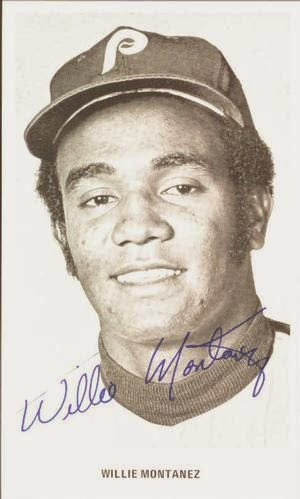 Number of Cards:  40
Card Size:  3 1/4" x 5 1/2"
Description:  As was the case with all Phillies photocards issued throughout the 1970s, these cards feature a black and white photo with the players' name below.  With the exception of the card for coach Brandy Davis, all cards contain a blue facsimile autograph.  The backs of the cards are blank and there's no indication on the cards themselves that they're from 1972.

How Distributed:  The cards were handed out to fans individually and supplied to the players in order to reply to fan mail or honor autograph requests.  I could be wrong, but I don't believe the cards were ever available in complete set form.  Cards were released throughout the season, as evidenced by the inclusion of Joe Hoerner, Jim Nash and Gary Neibauer.  Hoerner was traded to the Braves on June 15th (with Andre Thornton) for Nash and Neibauer.

Long-time Astros and Expos catcher Bateman wrapped up his 10-year career with 82 games with the 1972 Phillies, and this set contains his sole Phillies baseball card.

Schmidt appeared within two sets in 1972, the year before his iconic rookie card appeared with the 1973 Topps set - this set and the Puerto Rico Stickers set, both of which are extremely difficult to find.  This set is also notable for containing the first Phillies cards of both Boone and Carlton.

Variations/Rarities:  My only source for this set is the checklist found at The Trading Card Database and I'm not aware of any variations or rarities.

Also See:  1972 Topps #PR1 Mike Schmidt (This is a Phillies Room tribute to what Schmidt's 1972 Topps card could have looked like.)