Number of Cards:  46
Card Size:  4 1/8" x 6"
Description:  For the fourth year in a row, the card fronts feature a photo with the player's, coach's or manager's name in a red band with white text.  The card backs feature biographical information along with complete career statistics.  Medford Food Company was in the second year of its sponsorship of the set.

In the spring of 1992, the new Phillies uniform were kept top secret and they didn't make their public debut until opening day.  The cards in this set feature portraits of all players, coaches and the manager in their new uniforms, and (in my opinion) this is one of the nicer team issued sets released by the Phillies.

Complete Standard Checklist (36):  The cards are unnumbered, but I've presented them below ordered by uniform number. 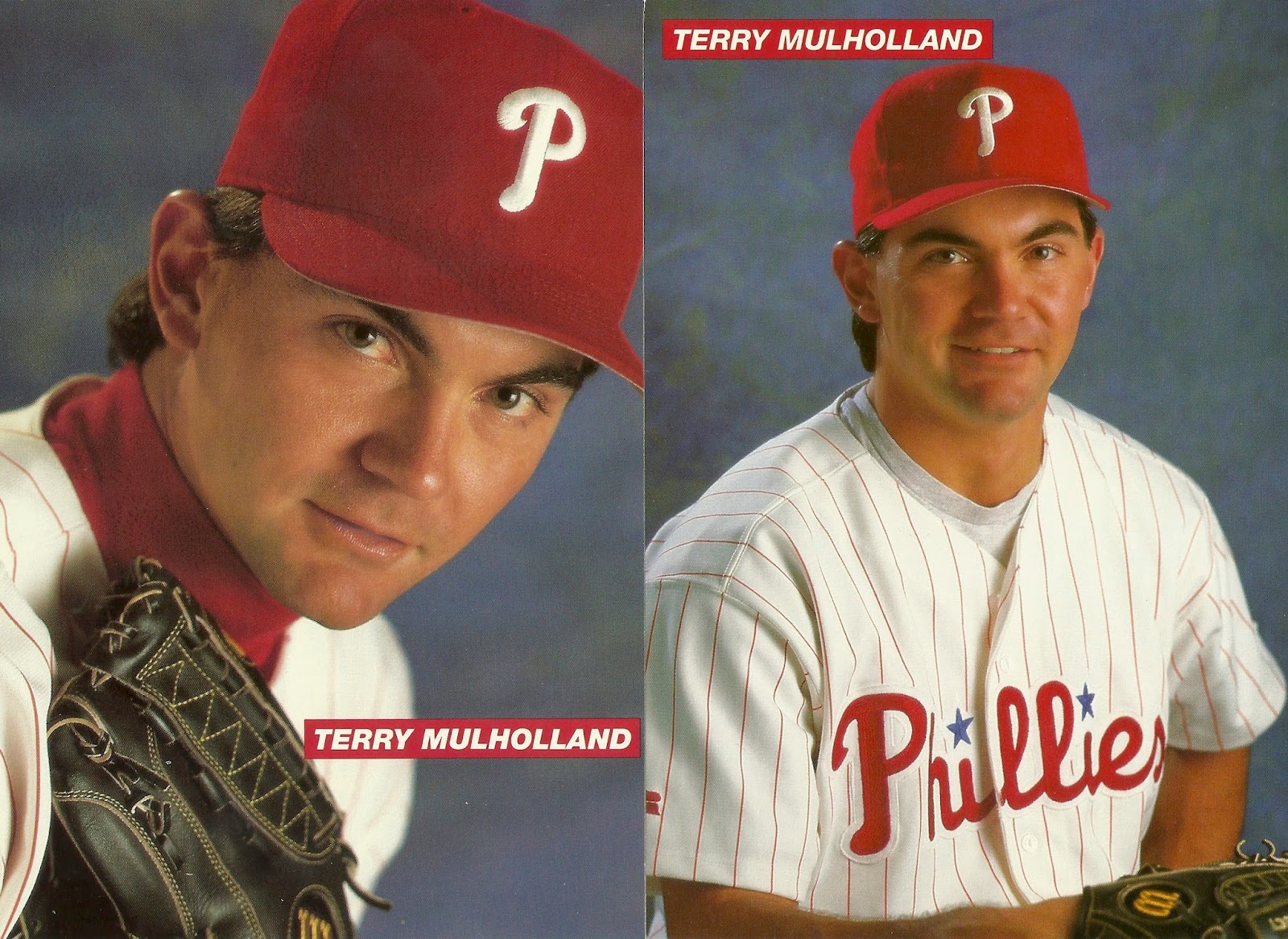 Manager (1):  Fregosi
Coaches (6):  Bowa, Menke, Podres, Roberts, Ryan, Vukovich
Phillie Phanatic (1):  Like everyone else in the set, the Phanatic is posed in a studio setting, wearing his new uniform.
Broadcasters (0)
Commemorative Cards (0):  Uniforms Through the Years
Other Cards (2):  Phillies Team, Veterans Stadium

I've shown off the Uniforms Through the Years set in past posts (see the links below), and it's by far one of the coolest cards ever produced for the team issued sets.  Veterans Stadium gets its first card since the 1984 Tastykake Phillies set.

Variations/Rarities:  As Rick points out in his comment below, the Phillies issued the following cards at the annual ALS fund raising event (Phillies Phestival) for players and former players signing autographs.  Of particular interest to me are the cards of the four members of the 1992 squad who didn't have cards in the regular or update sets - Baller, Javier, Millette and Mike Williams.

Steve also commented that Maddox, Noles and Pratt cards are in his collection with a 1992 copyright.  These cards most likely also orginated from the ALS event.
Also See:  Scrapbook Sunday: April 7, 1992; Uniforms Through the Years
Trivia:  Mulholland appears twice in the set - once in the original 36-card set and again in the update set.  This of course is very odd and the additional card in the update set could have been used for Stan Javier, who had been acquired from the Dodgers on July 2nd.
Resources:  Beckett.com; Phillies collectors Rick (@rickphils) and Steve F.
Posted by Jim at 7:00 AM

Thanks again Rick! I'll update the post for these ALS-only cards.

I have three cards shown as Copyright 1992 not listed in the post:

All of mine are signed, so I could see them being from the Phestival.

Any ideas about these?

I've added the Maddox, Noles and Pratt cards to the list. Thanks Steve!