Number of Cards:  46
Card Size:  4 1/8" x 6"
Description:  For the third year in a row, the card fronts feature an action photo with the player's, coach's or manager's name in a red band with white text.  The card backs feature biographical information along with complete career statistics.  Medford Food Company took over sponsorship of the set in 1991, and they'd sponsor the set for the next two years.

How Distributed:  The original 35-card base set was available for sale at Veterans Stadium throughout the 1991 season.  Details vary as to how the 11-card update series was originally distributed.  The 2001 Standard Catalog of Baseball Cards describes two updates being issued.  The first update being the three card highlight set featuring white bordered cards celebrating the the team's two recent no-hitters and Dale Murphy's 2,000 career hit.

The second update, according to the Catalog, contained eight cards and featured new manager Jim Fregosi, the Phillie Phanatic and six new Phillies players.  I have no recollection of purchasing two separate update sets at the Vet during the 1991 season, but my memory is admittedly starting to get a bit foggy.

Complete Standard Checklist (35):  The cards are unnumbered, but I've presented them below ordered by uniform number.

Manager (1):  Fregosi.  I find it strange that all the coaches received cards in the first set, but the manager at the beginning of the season (Nick Leyva) was omitted.  Leyva was fired on April 23rd, so my guess is that this set wasn't finalized until after his departure . . . or the first series originally contained 36 cards and the Leyva card was pulled after his firing.
Coaches (5):  Bowa, Lanier, Menke, Podres, Vukovich
Phillie Phanatic (1):  The Phanatic is shown posing while sitting on his ATV.
Broadcasters (0)
Commemorative Cards (3):  Greene, Mulholland, Murphy

Variations/Rarities:  As Rick points out in his comment below, the Phillies issued the following cards at the annual ALS fund raising event (Phillies Phestival) for former Phillies signing autographs at the event. 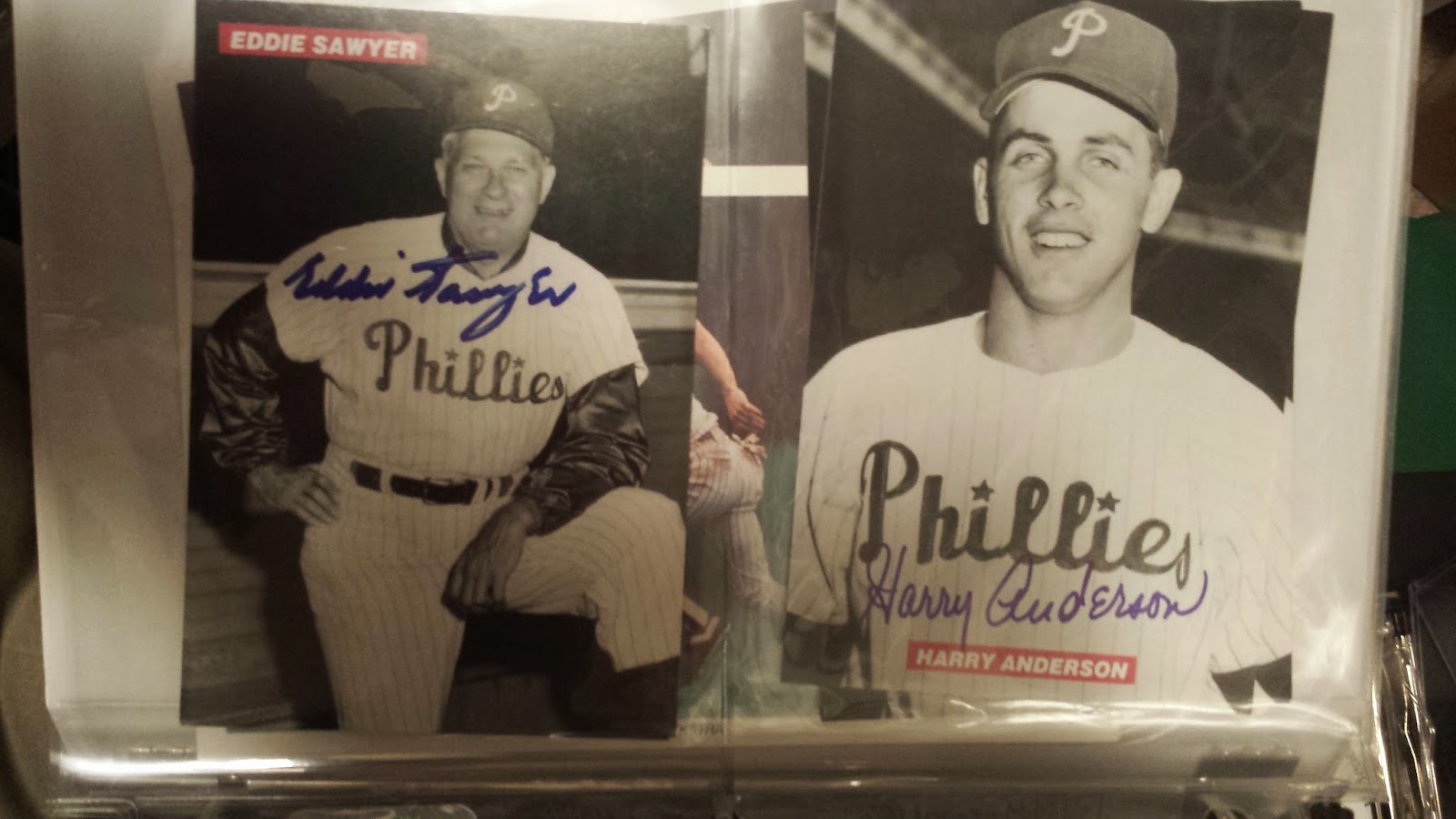 Also See:  Scrapbook Sunday - August 12, 1991
Trivia:  The Beckett database omits the update series and only lists the 35 cards from the base set.  Lindeman's uniform number is listed as #55, which is the number he wore during spring training.  He switched to #19 before the season started, taking the number most recently occupied before him by Kruk.
Resources:  Beckett.com; Phillies collector Rick (@rickphils)
Posted by Jim at 7:00 AM

It's funny, when I saw the subject line, I thought you were suddenly veering into minor league sets... I mean, in the Northwest League there used to be the Medford A's based out of Medford, Oregon... maybe they became a Phillies farm team and... On, never mind. :-)

Until writing this post, I had no idea Medford was the company that made the hot dogs sold at the Vet. (I believe they've since been acquired by Hatfield.)

I always assumed that "Medford" was a bank.

The only other 1991 team issued photocards were the ones made for retired guests at the Phestival: Eddie Sawyer, Harry Anderson, Curt Simmons, Maje McDonnell, Ron Reed and Gene Garber

Thanks for the update and scans Rick. I've updated the post for the ALS festival cards.

Jim, I've been looking to add some of the Phillies Medford Dale Murphy cards to my collection- any leads on where I might find some?
Thanks,
Steve

Hi Steve. Best of luck in your search!

My suggestion would be to set up a saved search in eBay for a 1991 set. You might have better luck tracking down a full set as opposed to tracking down the individual Murphy cards.

Medford sets seem to show up every few months or so.

Thanks for the reply, Jim!

I'll do just that!