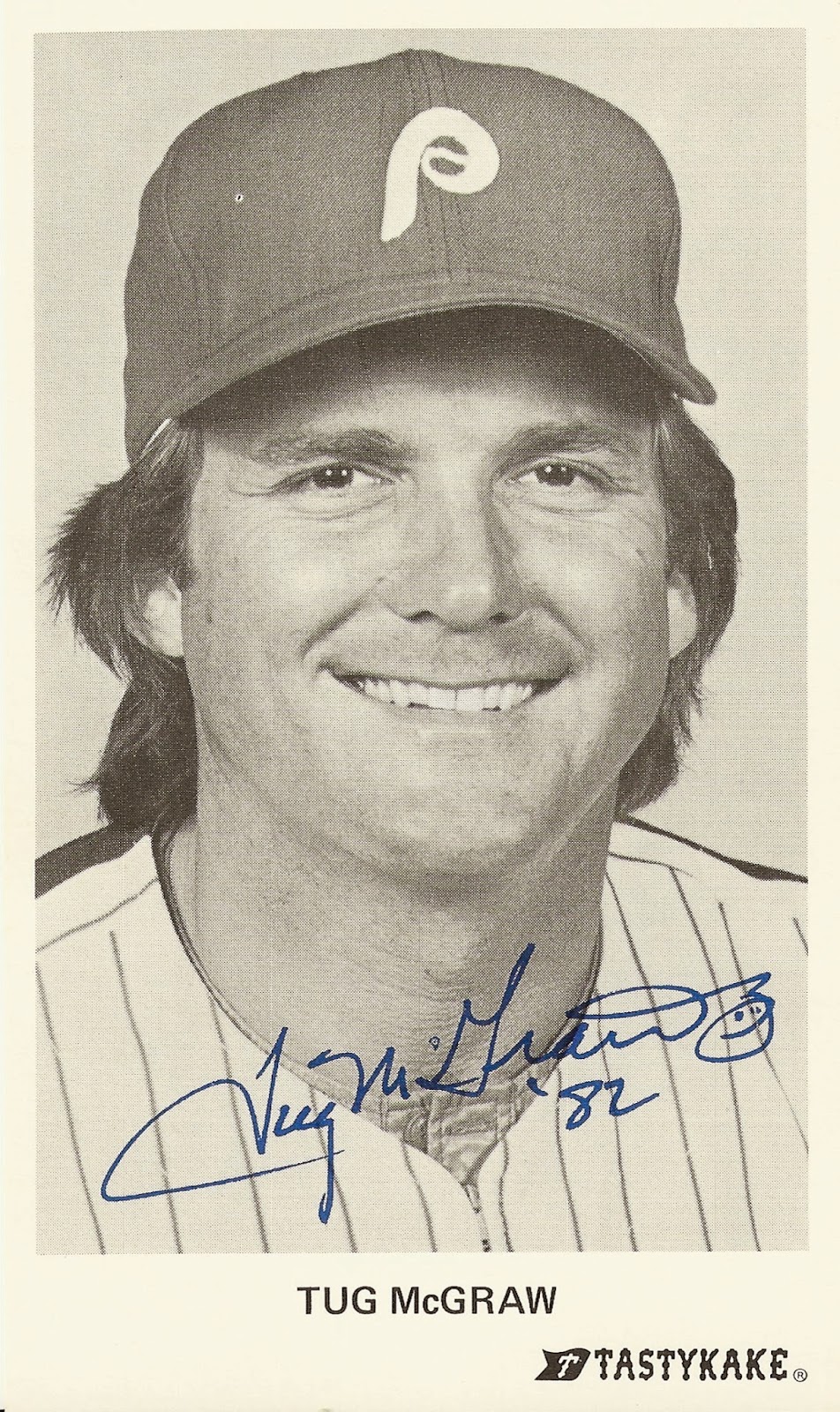 Number of Cards:  35
Card Size:  3 1/4" x 5 1/2"
Description:  This is the first of eight years during which Tastykake sponsored the Phillies team issued set.  The cards feature black and white pictures, with a mix of action shots and portraits.  Some of the cards include blue facsimile autographs on the fronts, and the backs of all cards are blank.
How Distributed:  My best guess is that these cards weren't ever distributed in set form, although I could be wrong.  I've only been actively searching for these cards for a few years now, but I've only ever come across single card auctions from the set.  The cards were most likely handed out to fans individually and supplied to the players in order to reply to fan mail or honor autograph requests.  (See below under Variations/Rarities for more on the distribution of this set.)

The one card from the set in my collection (as of this writing) is the McGraw card featured above.  The blue facsimile autograph looks surprisingly genuine.

Complete Standard Checklist:
The checklist found at The Trading Card Database lists only 28 cards in the set, omitting seven cards included on the checklist found within the 2001 Standard Catalog of Baseball Cards - Bystrom, M. Davis, Gross, Johnson, Maddox, Ruthven and Vukovich.  I'm including these cards on the checklist above as a Google Images search yielded images for the Maddox and Vukovich cards.  If those exist, there's a really good chance the other five exist and the entry at The Trading Card Database is simply missing these seven cards.

Variations/Rarities:  The Beckett database entry for this set omits the Bystrom card and adds three variations for a total of 37 cards in the master set.

As Rick points out in a comment to this post, the Phillies issued two versions of this set.  The first version released earlier in the year included cards of the coaches and most cards contain a blue facsimile autograph on the fronts of the cards.  Later in the year, a second 25-card set was released with no coaches, no facsimile autographs and no Tastykake logo.  This set contains a Bill Robinson card, not found within the first set as Robinson was acquired in June from the Pirates for Dick Davis.
Also See:  1982 Topps Phillies, 1982 Topps Traded #28T Bob Dernier
Trivia:  I spent a few minutes Googling Karen Eberhard Ball Girl until it started to feel creepy, so I stopped.  I know the current ballgirls hand out "cards" at their promotional stops, but these cards aren't in the style or size of the current year's team issued set.  I wonder what made the Phillies decide to issue a separate card of one of their ball girls in 1982?
Resources:  The Trading Card Database; Beckett.com; Phillies collector Rick (@rickphils)
Posted by Jim at 7:00 AM

A sign that I spend too much time thinking about baseball: I was idly looking at the "Tastykake" wordmark at the bottom of the Tug card, and it occurred to me that it wouldn't look bad on a baseball uniform.

What madness is this?