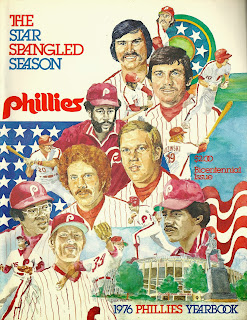 Every once in a while, I stumble upon an old* Phillies Yearbook for sale and I end up not pulling the trigger because I can't remember if I have it or not.  I'm adding this list to my blog so that I can always access what I have and what I need.

And if you have a spare 1956 Phillies Yearbook laying around, feel free to contact me and I'll find it a climate-controlled, comfortable home.

Yep, I was in the 1980 Yearbook. I've accumulated two or three different copies of it over the years.

I meant to say:

About 5 years ago I won an auction from Huggins and Scott for a collection of one Phillies yearbook per year from 1949-99. I only needed about 5, but I was also able to upgrade my existing collection. And then I sold the extras off individually on eBay and more than got my money back for the whole lot--so that worked out well. Most all of them sold, but I will take a look at whether I have duplicates of any of the years you need.

As for the gallery of yearbook covers, ask and you shall receive: http://philadelphia.phillies.mlb.com/phi/history/yearbook_covers.jsp

Although they are only displayable one at a time, not all on one page. Also, they only show one of the editions for the years where they had multiple. From memory, I believe they had two editions in each of 1959-63, 1965 and 1977, and three editions in 1964. The only ones with substantially different covers were 1964 and 1977; for the rest they simply added "Second edition" and changed around some of the inside.

There were two oddball yearbooks. In 1996, the yearbook was the usual 11" high, but it was also 11" wide, making it hard to store with the others. In 1997, the yearbook was contained within the (IIRC) 3rd program of the year. So if you bought a program each month, when June rolled around, the program price was bumped up from, whatever, $3, to about $10, the program was extra thick and had the words "Contains 1997 Yearbook" on the cover, and then when you flipped through it, somewhere in the middle was where the yearbook started. I don't think it can be separated from the program either. The picture the Phillies use on their site for it is just the first page of the yearbook section; unless you simply ripped off the front 1/4 of the program, you'd never see that cover displayed on your shelf. Maybe it's just me, but I find that was just a weird idea, especially after producing a separate yearbook for 48 straight years before that!

I still despise both the 1996 and 1997 yearbooks. I have a nice little shelf on which I've stacked all the yearbooks in my collection. The 1996 yearbook has to be displayed separately and it bugs me.

I'm a huge die hard Phillies fan! Have been my whole life back to my first game at veterans stadium back in 1979! I'm a huge collector of Phillies memorabilia! Particularly Phillies yearbooks and programs! I have every yearbook from 1968 to 2014! I'm starting on my collection of the 1960s yearbooks! The only Yearbook in my current collection is the 1997 yearbook! I've looked for it everywhere and have not found it! And now because of this great website, I know now why,it was in a game program during that season,that is very interesting. I agree that year and the 96 yearbook we're very odd lol. The 96 yearbook in particular really bothers me because it's bigger then my other yearbooks odd in size and can't store with my other yearbooks! I store my yearbooks and programs in clear plastic high quality plastic sleeves but can't protect that one because it's too big! Does anybody know why they did that with the 96 yearbook? Once again this site is great and glad I found it!

And good luck tracking down the 1997 Yearbook.

I have a few questions. First is why do the Phillies no longer make second additions of the yearbooks today like they use to do in the 60s and 70s yearbooks? Does anybody know what the most rare and hard to find Phillies Yearbooks? And do the yearbooks hold good money values in sports memorabilia among collectors? I think I read somewhere that the Phillies have the longest time producing yearbooks in Major League baseball? Does anybody know what I'm talking about and is there any truth to that? Does anybody know what Phillies yearbooks are the most valuable? Like which years? My favorite cover would have to be the 1970 yearbook! Does anybody have a favorite cover or covers? Kinda curious to know. I have other cover s I like too! My yearbook collection holds a lot of sentimental value and I don't think I could sell any of them or my programs either. I guess I would make a very good professional sports memorabilia collector lol.

And one more question. Does anybody know how to get Phillies season highlight films I'm talking like the 70s era. I wish the Phillies would make another DVD compilation of classic games in there history. The last one they did had games on it that have been shown on other DVDs and VHS over the years it was disappointing. Or it would be awesome to make a DVD documentary on the 70s era of the Franchise,which to this day I believe is still the greatest era of the Franchise! I would even love to see them or major league baseball do a DVD with highlights of all the NLCS's each of them! They could do it just like they did with the world series dvd they did! I'm sure the footage is out there just like the 70s team highlight films!

Hi Scott. You ask a lot of great questions. I'm not sure why the Phillies stopped producing second additions of their yearbooks, but I'd imagine it has to do with money. If there was money to be made, rest assured the Phillies would produce second (and third) addition yearbooks.

And I too would love to see the official release of the team's highlight films from the 1970s. In my opinion, there would be a high demand for these DVDs, especially given that we're in for a few lean years coming up.

Those 70s team season highlight films they have to be somewhere.when you watch a Phillies DVD ,like the team history videos for the most part you the same clips in all of them. They have to get those clips somewhere. It seems like most of the Phillies history dvds seem to focus more on the 1980 world champions and most of the 80s and 90s and most of the 2000s they don't ever seem to focus on the 1970s Phillies.It would be awesome for them to do a documentary on the 1970s Phillies specifically. I'm more fascinated with the 70s Phillies teams,since I was still to young to remember most of 70s. The one Phillies team that really fascinates me is the 1976 Phillies! It was the United States bicentennial which makes the 1976 team more interested! I also I would like to know more about Danny Ozark the manager during the 70s golden years. I think he is one of the greatest managers in the history of the Franchise! He never gets mentioned. And he has never been given any credit. We should research all of this!

Hi Charlie. Thanks for letting me know!

I'm saving my pennies these days, but I'll let you know if and when I'm interested in striking a deal.

looking for phillies video yearbook 2005(game on)&2015(body and soul)these are DVD's, thanks