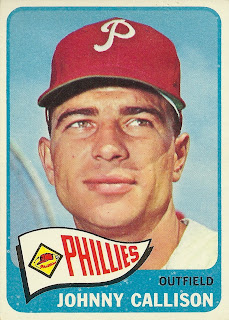 Next up in the journey through the awesome Phillies cards received from my Mom for Christmas is this fantastic specimen of a honest-to-goodness, genuine, All-American vintage baseball card.  I know I've mentioned this before, but I'm very excited about the upcoming 2014 Topps Heritage set, which will borrow the design of the original 1965 Topps set.  I've also mentioned somewhere before that if I was ever to decide to collect a complete Topps set from the 1960s, it would definitely be the 1965 Topps set. 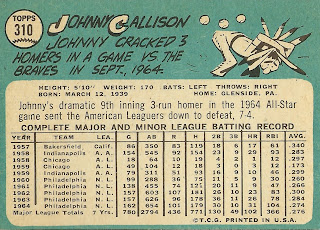 Callison was in the midst of the best years of his career when this card was released and Topps did a nice job of mentioning Callison's huge game-winning home run in the 1964 All-Star Game on the back.

So speaking of collecting the 2014 Topps Heritage set . . . I think I'm going to save up and buy a box or two for my oldest son and I to open.  (I refuse to use the verbs "rip" or "bust" when referring to the opening of a group of packs found in box form, as the younger collectors/whipper snappers do these days.)

Where should I purchase these box(es)?  I've read about bloggers purchasing from Blowout Cards before, but is that the best way to go?  And I would think that pre-ordering is the thing to do?  I haven't opened a new box of baseball cards since way back when my wife Jenna and I were trying to put together the 2008 Topps Heritage set, so it's been a while.

Email ThisBlogThis!Share to TwitterShare to FacebookShare to Pinterest
Labels: 1965, Callison