Happy New Year!  I for one am looking forward to 2014 and I'm excited for what's to come.

Sitting in my Mom's living room on the day after Christmas opening presents, I knew as soon as I had reached "the box."  The box is an annual tradition that began way back when we were living on 12th Street.  Among the many gifts under the tree, there would be a wrapped shoe box that contained several individually wrapped smaller presents.  Those smaller presents bore the unmistakable shape and size of a baseball card housed inside a top loader.  Every year, I take my time opening the contents of "the box," cherishing each new treasure being added to my collection.

This year was no different.  My Mom has four grandchildren now, so 95% of the present-opening focus is on them, as it should be.  The adults in the room share among the other 5% of the present-opening focus.  This year, as the kids marveled at their new toys,  I came across "the box" in my modest pile of presents.  My Mom turned her attention to me when she noticed I was about to start opening the six individually wrapped rectangles.  "There's one in there I'm not happy with at all," she said.

The card at the top of this post is the card to which she was referring.  It's a bit beat up and there's some sort of splotch in the lower left-hand corner.  The card was accurately labelled as "Good" and it probably wouldn't fit in with most collections.

But it's a 1955 Bowman Robin Roberts card, received as a Christmas present from my Mom, and that's all that matters to me.

It's been well-loved and it was spared some kid's bicycle spokes in the mid-1950s.  It fits in nicely with my other 1955 Bowman Phillies cards, and I'm now just six cards away from a complete team set.  Besides being an awesome set, the 1955 Bowmans hold some sentimental value to me as well.  These are some of the cards my Dad collected as a kid, and whenever he held a 1955 Bowman card in his hands he'd look at me and remark, "Boy, I had all of these.  ALL of them."  Tragically, his boyhood stash of baseball cards found their way to the curb once he left for college.

With the help of my Mom, I'm getting them back one card at a time. 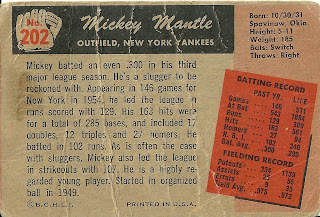 Related to this, I wanted to share a quick non-Phillies story.  My Dad's mother (my Mom-Mom) passed away when I was 11 and we were tasked with the job of cleaning up her house.  My Dad had held out hope that maybe some of his old baseball cards were stashed away in a forgotten box somewhere.  On what was possibly the last day I was ever in that house, we found this on the floor of the attic.

At the time, I had no idea how old the card was, or what set it had come from.  All I knew was that it was the back of a Mickey Mantle card, and all of Mantle's cards were extremely valuable.  My Dad leaned down, picked up the card and flipped it over. 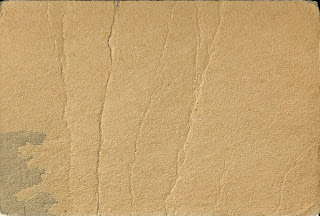 What greeted us was the blank piece of cardboard seen here.  My Dad would have been 11 when the 1955 Bowman set came out, and this Mantle was one of his doubles.  He vaguely remembered separating the front picture from the cardboard backing and either hanging the picture on his bulletin board or gluing it into a long-lost album somewhere.  We were more than a little disappointed and my Dad's faint hope of being reunited with his old baseball card collection was completely dashed.

Even though it's only the back of a vintage Mickey Mantle card, this little piece of cardboard still has an important place in my collection.  It's the sole survivor from my Mom-Mom's long ago baseball card purge and I'm happy to have it today.
Posted by Jim at 7:00 AM

Email ThisBlogThis!Share to TwitterShare to FacebookShare to Pinterest
Labels: 1955, Roberts

Somehow I missed this back in January, but great post! My dad's cards were also purged by his mom. Although in a nice twist of fate, he ended up working with Carl Furillo from the late 1970s until Furillo died in 1988, and I not only got to meet Furillo twice but my dad got me about 6 or 8 autographed cards from him (which my dad had picked up at flea markets) and an autographed baseball. Re the latter, unfortunately at age 11, I decided that would be a good ball to start getting the Phillies team to sign and so I have a 1980 Phillies team ball with "Best Wishes, Steve, Carl Furillo" written on one of the side panels!

Ha! Some archeologist from the distant future will be tasked with trying to figure out what connection Carl Furillo had to the 1980 Phillies team.