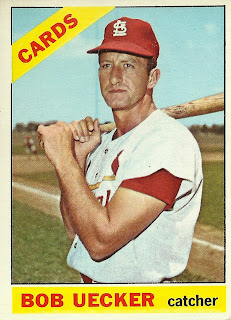 Rest assured you have navigated successfully to The Phillies Room and I'm not switching over to a blog about the Cardinals and their baseball cards for the coming new year.  My Mom included this Bob Uecker card in her Christmas present to me and I asked her if she knew why I had included it on my Phillies want lists.  "I was sure you had a reason," was her response.

And I did.  My reasoning for wanting this card is that Uecker was traded by the Cardinals to the Phillies in October 1965 for Pat Corrales, Alex Johnson and Art Mahaffey.  Joining Uecker in Philadelphia were Dick Groat and Bill White.  Uecker spent the entire 1966 season with the Phillies, hitting .208 in 78 games as the back-up to regular catcher Clay Dalrymple.  He was traded to the Braves in June 1967, having appeared on just one mainstream baseball card as a member of the Phillies - the 1967 Topps card seen here. 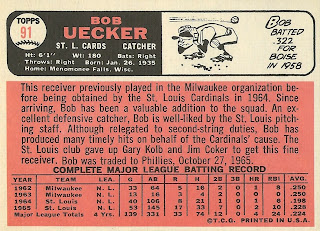 This card, appearing in the first series of the 1966 Topps set, was issued too soon in order to feature Uecker with his new team.  However, there's a version of the card on which the very last line of the write-up on the back makes mention of Uecker's new affiliation for the upcoming 1966 season.  And now thanks to my Mom, it will join the rest of the 1966 Topps Phillies within my 1960s Phillies binder.

Happy New Year from The Phillies Room to you and your family!  Here's to a wonderful 2014!
Posted by Jim at 7:00 AM

Email ThisBlogThis!Share to TwitterShare to FacebookShare to Pinterest
Labels: 1966, Uecker

Perfect! The "I can't get the bat off my shoulder" pose!

Nice find by you and mom. Now I will need to add that card to my want list.

Nice card. I remember Uecker in those Miller Lite commercials... and of course his role in the Major League movies.