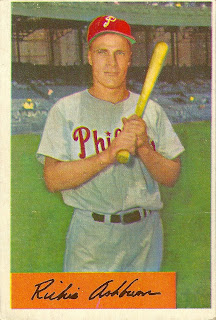 This is the last of the six cards I received from my Mom this Christmas, and it might just be my favorite of the bunch.  The 1954 Bowman set has really grown on me, and this card of Hall of Famer Richie Ashburn brings me one card closer to completing the Phillies team set.  As of this writing, I need just four more Phillies cards and I'll have all 14 Phillies appearing in Bowman's penultimate release.

It's also worth noting that I've replaced five cards originally appearing on this list, with five more "Most Wanted - Vintage" cards on the sidebar.  The quest continues! 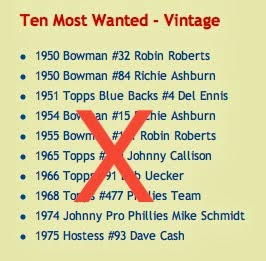 Email ThisBlogThis!Share to TwitterShare to FacebookShare to Pinterest
Labels: 1954, Ashburn

That Ashburn is awesome!