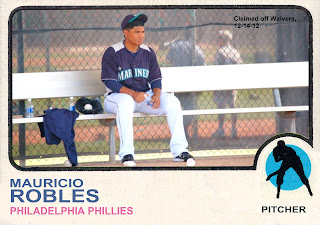 Last week, the Phillies claimed left-handed pitcher Mauricio Robles off waivers from the Seattle Mariners.  Robles is 23 and he's spent the past five seasons in the minors with both the Tigers and Mariners organizations.  He has a grand total of 15 games at Triple-A where he's compiled a 4-6 record and a 6.71 ERA.

Normally, I wouldn't create a card for someone who has such a slim chance of seeing time with the Phillies during the upcoming season.  But when I came across this photo of Robles with the chain-linked fence and blurry bystanders in the background, I knew the photo would capture the essence of the 1973 Topps set.

Genius - that card/photo could come right out of 73 Topps.

Great card! With a start like that, I can't wait to see the entire Chachi set for 2013!