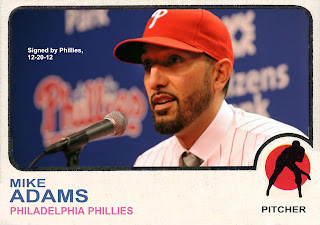 Slowly but surely, it's all coming together.  Hoping to address one the team's biggest weaknesses in 2012, the Phillies on Thursday officially announced the signing of right-hander Mike Adams.  He received a two-year, $12 million contract with a vesting option for the 2015 season.  Adams assumes the 8th inning set-up role that numerous pitchers tried out for last season.  Led by the likes of Chad Qualls and Antonio Bastardo, the Phillies blew 13 leads in the 8th inning during the 2012 season.  Adams will join former Rangers teammate Michael Young on the 2013 Phillies squad.

Showing that every once in a while, relief pitchers get some cardboard recognition, Adams had cards in last year's Topps, Gypsy Queen and Heritage sets.  Per the Phillies official website, Adams will wear #16.